Archive for the ‘Theater’ Category

Under the Influence – the finale!

All right, it’s time to wrap this puppy up!

It’s time for the big finale….of act one, anyway. (That will only make sense to you if you’ve seen Wicked.)

Last on my list of five songs that have influenced my life…..

I love musical theater. A lot. And Wicked is one of my favorite shows. I have seen it at least four times – it’s possible I’ve lost count – and will see it anytime I have a good opportunity.

It’s not unusual for me to love a show without having any personal connection to it, but with Wicked I identify strongly with Elphaba (the green girl who becomes the “wicked” witch from The Wizard of Oz, for those unfamiliar with the story).  True, I don’t have green skin, and that is primarily why Elphaba is ostracized. But as I mentioned back when I was talking about song #2, I definitely felt not quite like everybody else during my formative years. Hell, I still feel that way some of the time. That whole hippie parent thing, being Jewish, feminist, opinionated. I feel like anyone I went to high school with would agree I didn’t really quite fit in. And Elphaba is waiting to find a place where she belongs – I was waiting for that too, certain I would find my people when I went to college – and I did. So I feel a connection.

Also, one of the reasons I just generally love Wicked is because it’s about two strong female characters and their friendship. There are men in the story, there’s a romantic triangle, daddy issues, but the meat  is about the women and their relationship, which is very rare in pop culture. The song at the end, ‘’For Good’’, where they apologize for their wrongdoing and marvel over how they’ve touched each other’s lives? Chokes me up almost every time.

But ‘’Defying Gravity’’ is my favorite song in the show. It’s when Elphaba says screw everybody and realizes it’s time to go off and be a badass on her own. She’s not going to let people hold her back. I like to listen to it when I want to get really fired up about something and kick some ass of my own.  Plus, she’s super principled and she takes the difficult path to do the right thing, which of course is something I think everybody needs to be reminded of from time to time. And it’s Idina Menzel. Love her. (And hi, she’s married to Taye Diggs. Swoon.)

And I’m pretty sure my dog loves it when I really belt it out, as I’m prone to do.

How have I never seen this video clip before? I just got goosebumps watching it. It won’t let me embed it, but trust me, it’s worth the click. It’s Idina and Kristin Chenoweth performing it at the Tonys. (Although this comment under the video makes me want to….cry? Beat my head against a wall? ”lol wasnt that announcer guy in the beginning in the 5th season of buffy the vampire slayer?”  Sigh….yes, Joel Grey was on Buffy. And clearly THAT is why he’s famous….)

Or, if you prefer the soundtrack version, this is for you.

Some songs that almost made the list…something from Little Earthquakes by Tori Amos. Fisherman’s Blues by the Waterboys. Something by ABBA. The world needs more ABBA.(That’s a joke for a loyal reader who was convinced I was going to have an ABBA song on my list. Although a little ABBA Gold never hurt anyone.)  Something by R.E.M., because they’re maybe my favorite band ever. Something off of Laid by James. But thhose didn’t make the final cut, and I’m happy with my five, and I was satisfied with the end result.

It was definitely a fun experience from start to finish (other than, you know, the anxiety). Thanks for coming along for the ride.

Oh yeah, and now I totally want my own radio show! 😀 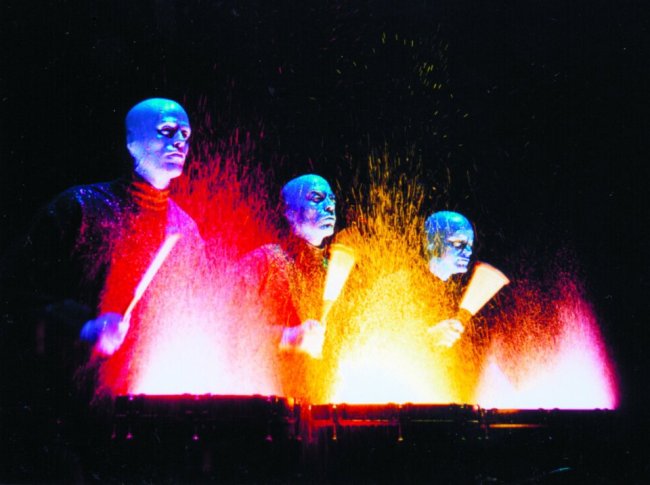 Blue Man Group take my breath away with their charm and whimsy, and how much they can convey without uttering a single word. With a turn of the head or a subtle gesture, we the audience know exactly what the joke is. And holy crap, the drumming. Lots of things make me wish I knew how to play the drums, but this makes me want to whale on a giant drum like nobody’s business.

If you’ve never seen them and have no idea what I’m talking about….well, you’re missing out. They’re kind of impossible to describe – even their own website is mostly pictures and video, without trying to articulate quite what they are/do. I first remember the Blue Men coming onto my radar with those commercials they did for Intel back in what must have been the late 90s and early 00s. Then my dad and I had to go to Vegas for business, and I wanted to see a show. “I don’t like plays,” he said. Fine. I would find something non-play-like and make him admit he liked it. Enter Blue Man Group. And he loved it. So much so that he has also seen them three times now. You’re welcome, Dad.

That magical feeling is part of what I love so much about the live theater experience.  There’s nothing like it. And perhaps seeing Blue Man Group for a third time is excessive (although I would happily see them again), but I want to support freakin’ awesome shows like this being brought to Fort Wayne. I want them (them? the powers that be? promoters? who knows…) to see that there is an audience here. I will spend my dollars on quality productions that come to my doorstep. Please feed my theater hunger.  I’m not used to going to bed high on theater right here at home; I like it!

(Then I crashed. Pretend I posted this late last night, mkay?)

(Ooh, and thanks, Sunshines, for inviting me to come along!)

I recently spent a few days in the city with a college friend. It had been something like 15 years since I’d been there. We had a marvelous time. Restaurants. Shopping.

Cupcakes. The Met. Katz’s Deli. Beautiful, tall buildings. The Highline. Central Park. SOHO. Times Square. We reenacted entire scenes from When Harry Met Sally. We saw a friend we hadn’t seen in years and met his delightful wife. I ate steak tartare and octopus for the first time. We spent a very moving hour at the beautiful 9/11 memorial. We rode lots and lots of subways, and almost never accidentally went in the wrong direction. Naps every day to rejuvenate. (It’s kind of ridiculous that all of that was just three days.) And theater. Theater. My god, the theater.

We made a trip to the ½ price ticket booth on Saturday and got some kick-ass ½ price seats at the kick ass, Tony-award winning revival of “Anything Goes”. I didn’t know much about it going in, but had seen Sutton Foster perform on the Tonys last year and I couldn’t get it out of my head. And I still can’t. It took my breath away. I want to learn to tap. It was delightful and de-lovely. And Sutton Foster is a freakin’ badass. I confess, her arms scared me a little (very, very long and incredibly wiry), but badass.

Our final night was when we saw The Book of Mormon. The show did not disappoint, and it was the perfect ending to our action-packed adventure. It was so very, very, very wrong. So inappropriate. Chock full of dazzling, irreverent musical numbers filled with foul language. (Five of the tracks on the soundtrack are flagged as “explicit”.) And the packed house ate. it. up. I was in heaven. We spilled out of the theater, and directly across the street people were flowing out from a performance of Chicago, and in every direction there were theaters with the best shows in the world, and it was thrilling. I have seen marvelous performances in Chicago and Indy and have thoroughly enjoyed touring productions here in town at the Embassy. But there is nothing in the world like Broadway. Nothing. NOTHING. I was completely high on theater.

You knew a “but” was coming, right?

Everything we think about New York is true. It’s jam-packed with people. They’re all in a hurry. They don’t seem very happy. I stuck out like a sore thumb. I made eye contact. I said, “excuse me”. I smiled. I looked around at things. Sometimes I made Greg walk more slowly. I wanted ice in my water. Jesus. Why the hell don’t they like cold beverages?

We were on the subway Sunday morning, and three young women were sitting together on the train. Each was holding a helium-filled balloon, which suggests they were either on the way to or from something fun. Yet they stared stoically at the floor, their hands, into nothingness. No smiles. No giggles. They looked somewhere between bored and pissed off. And most people on the subway looked like that. They also were dressed too deliberately. Everybody. Doesn’t anyone ever just put on a hoody? Don’t get all judgy on me and think I’m some Midwestern hick. I like to look cute. But sometimes I’m just going to hang with a friend or going to the library or running errands. And there was no “I don’t care” present in the city. It was too intentional for my taste.

And all those great things I rattled off that we did, especially the theater? There’s no way the people living there are taking advantage of it on any kind of regular basis. Partly because they probably can’t afford to. I developed a theory that there are no overweight people in NY because a) they have to walk 87 miles to get anywhere (not necessarily a problem) and b) they can’t afford food (more of a problem).

And here’s the thing: other than Broadway, there isn’t anything in NY that I can’t fully satisfy my craving for closer to home. I am a Midwestern girl, and my heart is in Chicago. The Art Institute, the Magnificent Mile, Grant Park, the Museum of Science and Industry, Lake Michigan – those feed my soul just as thoroughly as the experiences we had in New York, and I can be there in a few hours with travel expenses to the tune of a tank of gas. Plenty of outstanding restaurants and bakeries to feed my belly, as well.

Any trip to a big city always confirms that I’m living in the right place, too. I love to visit them, love to come home. Too many people, too close together. I would freak out. As previously mentioned, I love my house, my yard, and my dog, which is one of the luxuries of living in Fort Wayne. My friend’s NY wife was astonished that I, a single woman with a dog, live in my own house. With four bedrooms, to boot.

This is not to suggest I won’t go back to New York, and soon. I would plan an annual Broadway pilgrimage if funding allowed. I will happily spend another few days there from time to time, especially with an excellent traveling companion/tour guide like I had this time. I’m just not googly-eyed for it, the way so many people seem to be, and expect me to be.

I do not (heart) NY. But I would be delighted to have a fling with it every couple of years.