Under the Influence – part deux

OMG, I just listened to it! It was soooooo much fun!!!!!!!!! I’m high on radio right now! Thank you to my friends near and far who listened – it was a blast hearing from you.

What the hell is she talking about?

As mentioned previously, I recently had the opportunity to be a guest on a local radio program, Under the Influence, to talk about five songs that have left their mark on me in some fashion. There’s no podcast available at this time so you don’t get the fun banter here, but I did promise to share a recap.

It was tricky, picking the songs. I love music. (That seems like a really stupid, obvious thing to say –  I mean, doesn’t everybody? Except I’m not actually sure everybody does; I’m always sort of surprised when I discover that not everyone listens to music all day long. Talk radio? Pass. Books on tape/cd/other? Never listened to one. Silence? What’s that? Music. Music in the car, in the office, at night to fall asleep. Music always. Oops. I just digressed all over the place.) I have about 5000 songs in my iTunes library, so limiting myself was a bit difficult. The flip side being, a lot of my very favorite tunes don’t have any particular significance to me – I just like them. You can’t really spend an hour talking about, ‘Yeah, that song sounds cool. I like piano.’ Or I can’t, anyway. Plus, my memory is abysmal. My parents have two daughters. One of them remembers every detail about every thing that has ever happened, ever. The other one is me. So remembering something that moved me twenty or thirty (or forty) years ago proved to be a big challenge.

And, of course, there was self-imposed public pressure – this was for a radio show. Did I really want to subject people to listen to things like a marching band or a Broadway show tune? (Um….apparently!!  🙂 ) But yeah, I want you to think I’m cool, so I had to consider that factor also. Although as I said before, there also were no wrong answers, so I tried not to get too hung up.

We’ll talk later about some that almost made the cut, but now let’s get on with it!

Song 1:  Free to be you and me – The New Seekers
A looooooooong time ago, back in the early 1970s, Marlo Thomas pulled together a groovy project called Free To Be You And Me. It is a compilation of songs and poems and stories gathered in a book and recorded on a record (a RECORD!) and there was a TV program as well but I only remember the book & the record, which lived in our house. And according to the foreword, a book was Marlo Thomas’ original objective; the rest was gravy. She wanted a book to read to her niece that didn’t tell her what she should be, but rather, “a book of stories and poems and songs that would help boys and girls feel free to be who they are and who they want to be.”  There’s one about a boy who wants a doll. And one about not judging a book by its cover. And one about how the moms in commercials on tv look happy when they’re cleaning because they’re in a commercial, and NO ONE likes cleaning (except my friend Heather and she is CUCKOO) and so everyone should pitch in and help out.

And I have these super cool, liberal parents who also wanted that for their kids. I grew up thinking I could be or do anything, and it’s not just because of Free To Be You And Me, but I can remember sitting with my sister on the floor in our brightly colored basement listening to the record and reading along in the book over and over again. Hey, here’s my book! 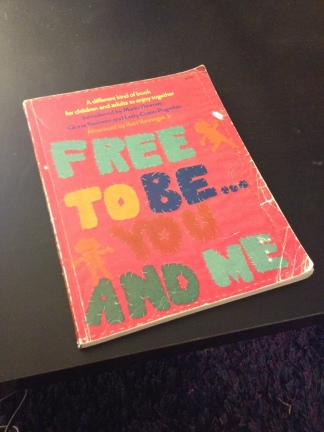 I had kind of forgotten about all of this and then Marlo Thomas came to speak at Tapestry and I was planning on attending, and I thought how cool it would be if I could have my old book signed….if only I knew where it was. We had a house fire when I was growing up. And then in early adulthood I was storing a bunch of stuff in my mom’s bas 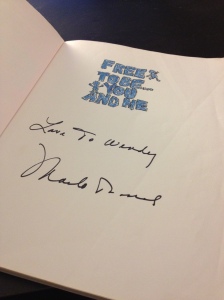 ement and we had a flood. So I wasn’t even 100% sure I still had the book. But lo and behold, I did, on a bookshelf with some other surviving remnants of my childhood. (I’m pretty sure my sister has the record.) Anyway, finding my book and getting it signed put it all back on my radar. It’s available on CD now, so I bought a copy for myself and another one to send to a friend’s kids so I know another generation will learn to love it.

I didn’t realize at the time that not everybody growing up in Indiana was listening to this. Not everyone had hippie parents who raised them to be open-minded, idealistic, and full of GIRL POWER. I’m so thankful that mine did. And Free To Be You And Me is part of the solid foundation that made me the optimistic, idealistic, independent, badass chick I am.

Here, for your listening pleasure: Free To Be You & Me. I’ll be singing along at my end.

So, I was reading a really, really long blog post over the weekend and maybe I have a short attention span, but I lost interest and started skimming. To cater to my fellow OOH, SHINY! Syndromers, we’re going to split this up. Telling four more stories like that all in one post just seems too long. So that’s all you get for tonight.  See you back here soon  for song 2! 🙂

Under the Influence – part 1

Hey guys and gals! Have you (those of you who don’t know me) ever wondered what my voice sounds like? (Somehow I doubt it, and if you have, I might think you’re a little creepy.) Regardless, here’s your chance! I’m going to be on the radio. What??

Northeast Indiana Public Radio has this cool program called Under the Influence. Every week they invite “regular people” into the studio to discuss five songs that have had an impact on their lives.  And I am the regular person of the week!

Fortunately they never used the word ’’favorite’’ because that would have sent me into a full-blown panic. I’m not good at picking favorites. But songs that have helped me through a rough time or bring back special memories or help me fire up for something? Sure, I can come up with that list. Limiting to five was tricky, but I’m pretty sure there are no wrong answers (although I fully expect some of you to critique me).

I will share the songs and the stories behind them, but not until after the
program airs on Thursday, because duh, you should listen to it, and they stream it online so don’t give me grief about not being in the listening area. 😉  And we recorded it a few weeks ago, so you can’t call in to heckle me, sorry Charlie!

Thank you to my friend Samantha for referring me to Sarah & Rob, the hosts – it was definitely a fun experience, other than the anxiety about picking great songs and being prepared to talk for an hour. And worrying what I sound like on the radio, and whether or not I talk too fast or slur my words too much. Although once you put on those headphones, it does kind of bring out one’s inner public radio voice. 🙂  I think. I guess we’ll find out on Thursday!