My shirt. Is black.

Due to my work-from-home pajama lifestyle, I haven’t done much shopping the last few years. I have a pretty solid collection of t-shirts and hoodies and yoga pants and, for dressing up, jeans and hoodie sweaters. So before our recent trip to Chicago, I decided I needed some actual clothes – something that you might not just decide to sleep in because you have it on an it’s comfy.  So I went shopping.

I tried on a heap of things, including a blouse/top/shirt thing that was a little more money than  I would normally spend on something like that, but it looked like my ideal shirt: cute, comfortable, sleeveless for easy wearing with layers or alone in warm weather, and black – goes with everything. I tried it on. It was perfect. Totally worth the more money than I would usually spend.  For a moment I stared at it intently in the bright dressing room lights. Was it actually dark, dark blue? Nope, I compared it to my (black) coat, my (black) tshirt – it was black. Woo hoo! Took it home and it went perfectly with everything I hoped to wear it with.

I took it with me to Chicago. Perfect for getting a little dressed up for the theater. Our hotel room had weirdly bright lights. Goddammit. Is it navy blue? I can’t believe it. I CAN’T BELIEVE IT.

“What color is this shirt?” I asked Klondike.

I refuse to accept this.  The above incident never happened. My shirt is black. I am going to wear it as if it is black. You probably won’t be able to tell. It was so dim in the restaurant where we had dinner that night that I bet most of the other people at the table couldn’t even tell I was wearing ANY shirt, let alone what color it was. My shirt is black. If you ever see me wearing it and you think it might be blue, you are wrong. WRONG, I say.  And I dare you to say otherwise.

My shirt. Is black.

(I just walked past another benefit of living alone. There is a heap of laundry on the floor over there, some in a basket, some just on the floor. It’s been there for, oh, a while. And no one has to know, or be annoyed by it.)

The other day I was reveling in the awesomeness of one of my impulse purchases, and I thought, “This is the best thirty dollars I have ever spent.”

I know what you’re thinking. You’re thinking I’m talking about my (shiny) purple toaster, which I impulsively bought one day for $30 at Target, even though I had a perfectly functional (and boring) toaster already sitting on my kitchen counter. 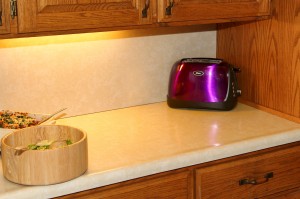 Haha! Wrong! I do love, love, love my shiny purple toaster, and someday I hope to have more purple appliancy friends for it in the kitchen. But no, the amazing $30 dollar purchase I was marveling over was my showerhead. Don’t go there, it’s not what you think. I have a light-up, LED, color-changing showerhead. And it. is. da. bomb.

I first discovered it, of all places, on the Facebook wall of a local seafood restaurant. (We can discuss their lousy use of social media another day.) It was apropos of nothing, just a cool looking picture:

I reposted it to my wall because, holy crap that was pretty damn cool (and shiny and colorful)! And before I knew it, a friend had Googled it and located it for sale. And it was ONLY THIRTY DOLLARS. And there were only THREE LEFT!!!! It was a shiny, colorful, impulse purchase perfect storm. I hemmed and hawed for a few minutes. I mean, come on. I’m a grown up. (Sort of.) Is a light-up rainbow showerhead really what I need in my house?

I ordered it. It arrived. I kept my expectations low. Were the pictures online and on the packaging a little misleading? Yeah. Does it lower my water pressure a teeny, tiny bit? Yeah. Does any of that matter? NO. It’s soooooo awesome! Especially in the dark.

Which is what happened the other night when I had my Best Purchase Ever revelation. I came home from a less-than-stellar Zumba class (NOT your fault, Lori, if you’re reading!!!!), and I was cold and tired and kinda crabby. Hot shower would be a good remedy for that anyway, but add in the bitchin color-changing lights and it is impossible to be in a bad mood in the disco shower with all the other lights off. It also might be kind of impossible to shave your legs with all the lights off, and hazardous getting out after turning off the pretty light-up shower, but who cares???? I kind of want to go take a disco shower right now, even though I’m fairly clean, having just showered earlier today.

It’s spreading, too. For my birthday, Klondike got me a faucet for the kitchen sink that lights up. That one is temperature-indicative. Blue lights for cold, red lights for warm, green for in between. It pretty much rocks, also.

Someday I’m going to die, and my house will be a realtor’s nightmare. Perhaps in my will I should indicate where I put all the original, boring, non-light-up water features (the linen closet, in case you should be the one settling my estate). In the meantime, it’s my house. Colorful silliness prevails. Thanks, 3Names, for the groovy pics.

Um, yeah, so I might need to get this. Thanks, Krista.