See that lovely girl over there in my picture?  ——->

The furry one? That’s Ruby.

She is the funniest little dog, overflowing with personality. And today is our anniversary. Two years ago, my friend Sue sent me yet another doggie personal ad. I had told her I might be ready to start looking for my next canine companion, and she had been relentlessly sending me doggie porn, but nothing had sparked my interest until I saw Ruby Tuesday. She was fluffy (one of my requirements) and totally smiling for the camera. I decided I should go take a look, so I rounded up my dad for a second opinion, and we headed off to the shelter.

She was sitting quietly in her kennel, watching, waiting. I asked if I could meet her, and she was a total doll. Smaller than I thought I was looking for, but cute as shit and super friendly. She had been abandoned at the shelter so they didn’t know much about her, but she appeared to have been well cared for. I was smitten.

The nice people at the shelter explained that the people who had been there right before me wanted her, too. They have this kind of odd system where they make you call and leave a message the next morning to say if you really want to adopt. The people had to call by 10am if they wanted her. I could do the same thing, and be second in line. Great. I went home and tried not to get my hopes up. The next morning, I called and left a message indicating that I was still interested.

I thought I should hear within an hour or so if I was going to get her. An hour passed and my spirits started to sink. Of course the other people wanted her – why wouldn’t they? 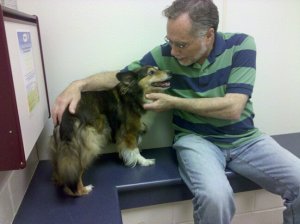 When my phone rang a little after 11, I figured they were calling to let me know Ruby Tuesday had been adopted. Instead, they told me that the family ahead of me was planning on adopting both a dog and a cat, but when they found out someone else wanted Ru, they decided just to adopt the cat so I could have the sweet doggie. I almost started crying. We were meant to be.

What ha?? That day? Going to see her was a total whim. I wasn’t prepared for a dog – no leash, collar, food, treats, bowls, toys! But no sweat, I had five hours.

I think we were both a little anxious when we made the drive home that afternoon. You never know what you’re getting into with a new dog. Hell, I didn’t even know conclusively if she was housebroken (she was). I let her sniff around the yard a little, then took her inside to give her the grand tour. She wasted no time making herself at home, immediately jumping on my bed with an expression on her face that said, “So obviously this is where I sleep. Would you like to join me?”

We spent the next several days settling into our new life together. I was concerned. I’d had a really special bond with Sylvia, my prior dog, and Ruby was so different from her; I wasn’t sure I was going to fall head over heels.

I am powerless to resist the fur babies. 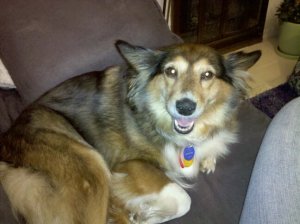 Seriously. I am the cutest.

In no time at all she had me wrapped around her little paw. I can’t imagine not having my funny, snuggly, happy Ruby girl. There will be more Ruby stories another day. For today, happy anniversary, sweet baby dog. And to the neighbors….sorry about the sometimes excessive barking.  🙂 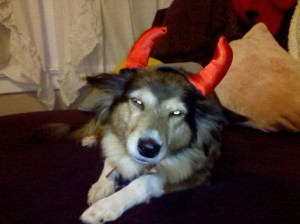 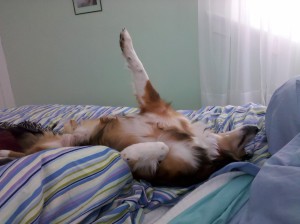 How you know you’ve found a good one